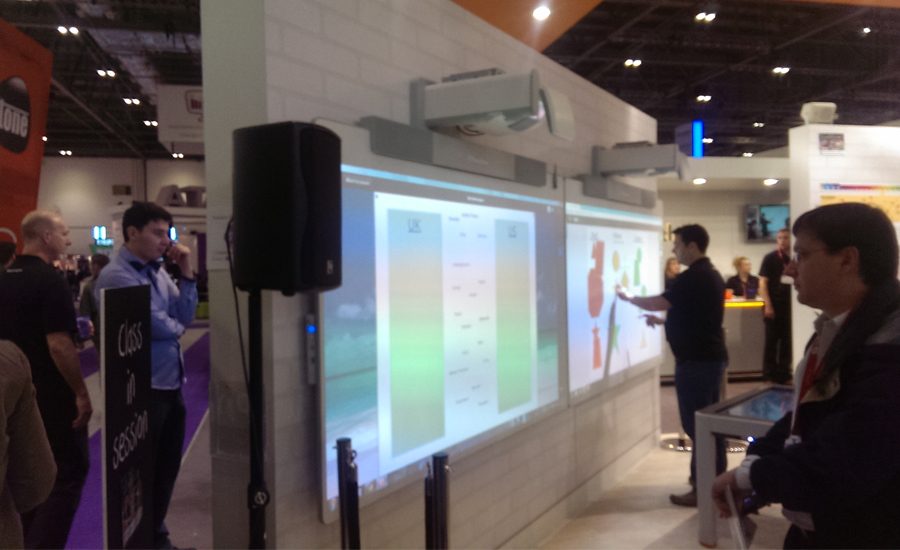 On January 25th the time had come again for us to descend on the BETT show again to discover what technologies will be entering the classroom this year. We had some very interesting conversations with a variety of companies and quickly learned what the buzzwords for the 2014 event were likely to be! For those of you who were not able to make the BETT show this year, we have summarised our findings below and given an insight into what we think will we be the main talking points in education technology for 2014

We had a play with a number of new systems coming to market in the first quarter of 2014 by some of the leading players such as SMART, Promethean and Samsung which will allow you to integrate a mixture of devices in the classroom for collaborative learning.

Apple have stolen the limelight as far as tablet devices and have become what Hoover became of the vacuum! The Samsung School setup was very impressive but unfortunately is only compatible with Samsung Galaxy tablets. An introduction to the Samsung Smart School can be seen below:

SMART and Promethean as well as others are about to release large screen displays ranging from 65″ t0 80″ which they predict will overtake traditional projector/interactive whiteboard sales within the next 12 – 18 months. We were very impressed by the quality of the picture on all displays we looked at and believe the boards will provide significants cost savings to school as a result of lower maintenance costs due to their being no projector bulbs to replace and air filters to clean!

With the ICT curriculum due to change in primary schools we were keen to see what services have come to market to help schools to deliver the coding syllabus. We came across a volunteer-led organisation called Code Club which organise a national network of after school coding clubs for children aged 9-11 years old. Code Club create projects for their volunteers to teach at after school coding clubs or at non-school venues such as libraries. The projects they make teach children how to program by showing them how to make computer games, animations and websites. More information can be found here: www.codeclub.org.uk

We had a chat with a company called MakerBot who offer a great range of desktop, affordable, sleek 3D replicators. We were very impressed by their range of 3D printers that start at a very reasonable £999. The devices look great and seem very user friendly, a great introduction to 3D printing for the classroom. MakerBot told us there are more exciting products to soon be added to their lineup so we are excited to see what will come next …

See more on this here

If you are interested in finding out more about the BETT Show 2014 or any of the technologies mentioned above we’d love to hear from you. Please feel free to contact us on 01522 718248.